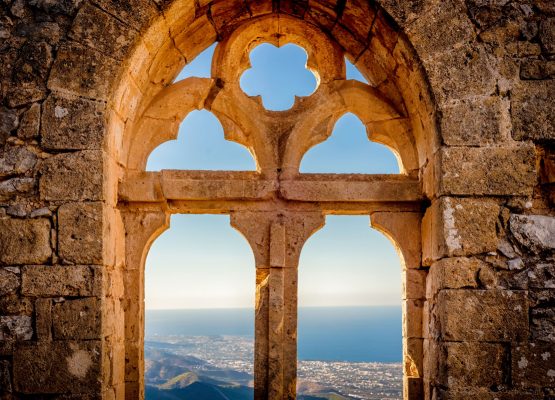 Perched high in the Kyrenia mountain range, overlooking the Mediterranean and the surrounding areas of the North Cyprus landscape, stands the castle of St Hilarion.

Providing the castle with command of the pass road from Kyrenia to Nicosia, Hilarion is the best preserved ruin of the three former strongholds in the Kyrenia mountain range, the others being Kantara and Buffavento.

Contrary to the belief, the castle is not named after the Saint active in Palestine and Cyprus in the 4th century, but after a hermit monk who fled from persecution in the Holy Land and lived and died in a cave in the mountains.

Along with Kantara and Buffavento castles, St. Hilarion was originally built as a watch tower to give warning of approaching pirates who launched a continuous series of raids on Cyprus and the coasts of Anatolia. Although a monastery and church were built here originally, the first references to the castle are found in 1191 records. For some time it remained of strategic importance, but later it became the summer resort of the Lusignan nobility.

Much of the castle was dismantled by the Venetians in the 15th century to reduce the up-keeping cost of garrisons.

Built on three distinct levels, each one was designed to be self-sufficient and self-contained. The lower and middle wards served economic purposes, while the upper ward housed the royal family.

The parapets for the defence of the main entrance were fortified by the Byzantines in the 11th century with the lower section of the castle being used for billeting soldiers and their horses. The middle section contained the royal palace, the kitchen, the church and a big cistern. At the entrance to the castle in the upper section, there is a Lusignan Gate with a courtyard in the middle.

The panoramic view from the “Queen’s Window”, carved in its Gothic style on the second floor of the royal apartments, is superb and well worth the climb – a scenic view of the northern coast of NCY, especially the plains of Lapithos.

Reputedly the inspiration for Walt Disney’s ‘Sleeping Beauty’, the castle offers many opportunities for both those with an interest in history and those seeking spectacular views – on a clear day you can see all the way to Turkey.

There are steps all the way to the very top – the ascent is steep but a handrail is ready to assist in the main. If you make it to the very peak at 732 metres above sea level, you will have an opportunity to take a souvenir photo alongside a uniformed foot soldier.

Flat and stout shoes are advised and especially in the hotter months, visitors should carry plenty of refreshments with them. 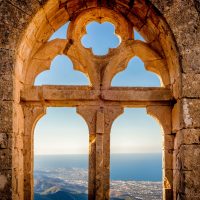 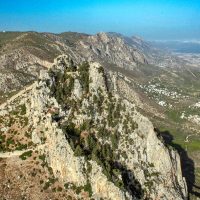 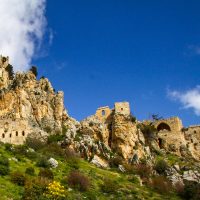 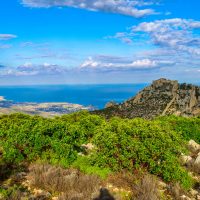 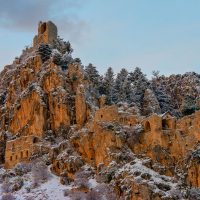 Of the three crusader castles on the Five Finger Mountains, Kantara lies furthest to the East. At 700m above sea...
Discover