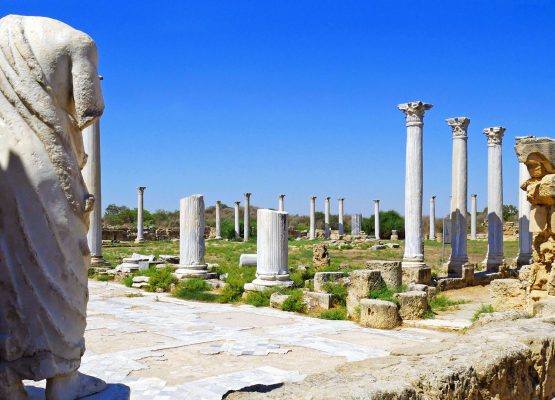 Once upon a time Famagusta was the most important port city on the island.

The naturally deep harbour attracted ships, merchants and traders from all over the eastern Mediterranean and further.

It was during this time that the region began to flourish with wealth, and the idea that wealth could be measured by the churches they built inspired these rich merchants to build a multitude of them.

Famagusta came to be known as “the district of churches” – it has been said that Famagusta had a church for every day of the year, each one paid for by a man or woman intent on buying their place in heaven – every turn in this enigmatic city will reveal churches each with a different story to tell.

Today the area boasts some of the most impressive medieval ruins anywhere in the world. The contrasting Lala Mustafa Pasha Mosque is fascinating for its gothic cathedral exterior as it was once a church, which has since been transformed into a mosque on the inside.

A three kilometre walk along and through the Venetian walls which encircle the entire ancient city offers a wonderful insight to its history, like a crumbling postcard to the past.

One of the ancient City Kingdoms of Cyprus, Salamis is a home to some fantastically preserved Roman ruins, including statues, standing columns, theatre and baths.

Impenetrable fortresses that inspired William Shakespeare, defence models drawn by Michelangelo, Venetian Palaces inhabited by royals, hidden treasures yet to be discovered, excavated tombs with miraculous revelations, and much more.

Famagusta is famous for its opulent history and a hot spot for time travellers.