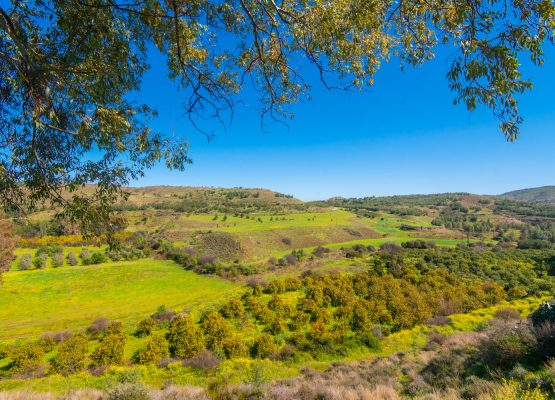 A Harmony of Colour

A small town whose outer margins encompass a stretch of picturesque coastline, the magnificent foothills of the Troodos Mountains, lakes and reservoirs.

The water from the mountain springs finds its way down to the fertile coastal plain with its rich soil and benign climate. No wonder then that the area is known as ‘The Fruit Basket of Cyprus’. A wide variety of fruit and nuts flourish, along with plentiful citrus groves.

Should you visit in the summer months be sure to check out the annual Orange Festival in nearby Güzelyurt in June along with the Walnut Festival in July.

Lefke was once a thriving copper and gold mining town, in Roman times and more recently. Vestiges of this remain, along with three mosques from the Ottoman period and houses in the centre that reflect the town’s colonial past.

Nearby are the historic remains of the ancient city of Soli and the Palace of Vouni. Soli is famed for its Roman remains, particularly the Basilica with its mosaic floor, and an amphitheatre which has been restored and now presents plays and concerts.

The Palace at Vouni enjoys a spectacular sea-facing cliff-top location and the ruins are evocative of a bygone age of splendour.