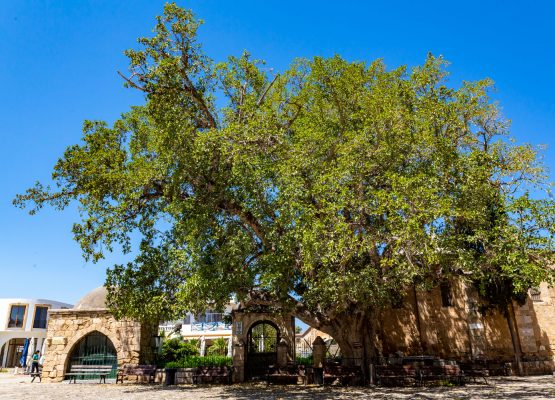 Outside the entrance of the Lala Mustafa Pasha Mosque, this tree according to botanists was planted at the time when building of the original St. Nicholas Cathedral structure commenced, hence making it over 720 years of age, and the oldest living tree on the island.

The tree has many names, including Ficus sycomorus, the sycamore fig or the fig-mulberry as its’ leaves resemble those of the mulberry – however, locals refer to it simply as the “Cumbez” (jewm-beyz).

The Cumbez is native to Africa south of the Sahel and north of the Tropic of Capricorn and is a tropical fig species that has been cultivated since ancient times.

The main trunk of the tree is surrounded by smaller trunks which have grown into the main and providing it added support, springing up from the massive root system.

According to local folklore, there are seven trunks round the main trunk, each representing every one hundred years of its past. In the Bible, the sycomore is referred to seven times in the Old Testament and once in the New Testament.

This monumental tree is what botanists call simple deciduous – its leaves will have all but disappeared in the winter giving the illusion that the tree has died. Yet in a month, towards the beginning of spring, all the leaves cover the whole tree with dense green foliage, throwing a magnificent shade over the courtyard of the cathedral converted mosque, welcoming travellers visiting during the hot summer days.

The Cumbez is the oldest living thing in Cyprus and what a story it has witnessed – the Lusignan knights in their armour clanking around the yard, Venetian builders, an Ottoman siege, earthquakes the Peace Operation of 1974, and only the tree knows what more.

If you make your way to Famagusta, be sure to capture a selfie with living history, and be sure to tag us on our social media accounts. More health-conscious visitors may also be tempted to hug the sycomore – hugging a tree increases levels of the hormone oxytocin, responsible for feeling calm, emotional bonding and general happiness. The Cumbez is also known to absorb negative energy of its visitors and turn it into positive ones. 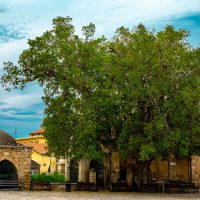 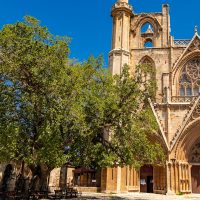 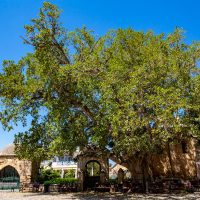 Also known as the Kyrenia Mountains, this long and narrow mountain range runs for over 170 kilometres parallel to the coast of North...
Discover

Envisioning the ideal Mediterranean idyll and one pictures perfect coastlines, spectacular mountainsides and of course stretches of landscapes lined with...
Discover

Cyprus hosts nesting of both the loggerhead turtle Caretta Caretta and the green turtle Chelonia Mydas, which are categorised as...
Discover

This perennial bulb plant is a Cyprus endemic belonging to the Liliaceae family. Grown on the pastures around the Tepebaşı...
Discover

The Wild Donkeys undoubtedly have a special place among the fauna of North Cyprus. Descended from the African wild ass,...
Discover
Discover
The Island
Events
Media
Travel plan
NCY For
Essentials
This website uses cookies to provide you with the most relevant information. Please accept cookies for optimal performance.AcceptRead more