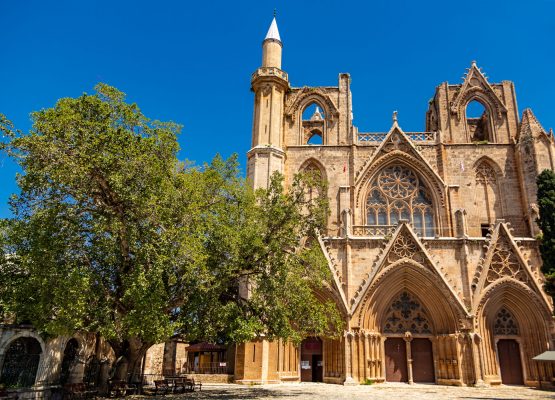 The Reims of North Cyprus

The Lala Mustafa Pasha Mosque originally known as the Latin Cathedral of Saint Nicholas and later as the Saint Sophia (Ayasofya) Mosque of Famagusta, is the largest medieval building in Famagusta and one of the most impressive Frankish buildings still to survive in the Near East.

The most impressive edifice in Famagusta if not the whole island, this beautiful gothic Catholic Cathedral was built during the Lusignan period and dedicated to St. Nicholas.

The Lusignan dynasty ruled as Kings of Cyprus from 1192 to 1489 and brought with them the latest French taste in construction, notably the developments in Gothic architecture.

Possibly designed by the Frenchman Jean Langlois and thought to be built on the remains of an earlier church, the cathedral was constructed from 1298 to 1312 and consecrated in 1328.

The building is built in Rayonnant Gothic style, quite rare outside France. The historic tie between France and Cyprus is evidenced by its parallels to French archetypes such as the Notre-Dame de Reims. Indeed, so strong is the resemblance, that the building has been dubbed “The Reims of North Cyprus”. In style it also resembles the St. Sophia    in Nicosia and the Bellapais Abbey overlooking Kyrenia.

It was built with three doors, twin towers over the aisles anda flat roof, typical of Crusader architecture. Several royals were buried here, including King James II of Cyprus and his infant son James III, the last two Lusignan rulers, in 1473 and 1474. And it was at this cathedral that the widow of James II, Caterina Cornaro yielded to the pressure of the Venetians, renounced her royal rights and ceded Cyprus to the Doge of Venice in 1489.

Sometime after 1480, a meeting chamber, known as the Loggia Bembo, was added to the south-west corner of the cathedral. Notable for its elaborately moulded entrance with slender pillars in marble, it is in an architectural style that departs considerably from that of the cathedral proper. The association with the Bembo family, some of whom held prominent positions in Cyprus, is shown by their heraldic devices on the building. To enhance the Loggia, late antique fragments in marble probably brought from Salamis, were placed as seats each side of the entrance.

The upper parts of the cathedral’s two towers suffered from earthquakes and were badly damaged during the Ottoman conquest. With the Venetians defeated and Famagusta fallen by August 1571, Cyprus fell under Ottoman control and the cathedral was converted into a mosque, a mihrab and minaret added and in turn renamed the St. Sophia Mosque of Famagusta.

Inside the mosque, in accordance with Muslim practice, all images of the human form were removed, and any painting and frescos on the walls were covered with plaster – who knows what treasures remain hidden underneath. Some stained glass was replaced by clear glass, and as in all mosques, the floor of the church was covered by a carpet, leaving a possibility that some gravestones remain to this day. A few tombs can still be identified today in the north aisle.

Nevertheless, the architecture remained entirely intact and its use as a mosque spared it from the Baroque additions and 19th-century restorations that were inflicted on most European cathedrals. Thus the building is still a rare example of pure Gothic architecture.

The name continued in use until 1954, when, like its sister in Nicosia, the mosque was renamed, and is today known as the Lala Mustafa Pasha Mosque, after the Grand Vizier of the Ottoman Empire who led its forces against the Venetians in Cyprus in the 1570 Ottoman conquest.

The main entrance to the cathedral converted mosque is at the western end, on the eastern side of the famous Namik Kemal square where this grand monument is located, in the town centre.

The cathedral’s façade in honey-coloured stone, makes for an impressive sight as one emerges from the narrow streets of Famagusta. The west front has three shallow porches, the centre wider than the others.

Above each of them is a plinth, which is assumed to have been for stone statues, most likely of Biblical Saints as in the Notre Dame de Paris. This style of ecclesiastical architecture was known as the ‘Decorative Period’.

Over the centre porch is a charming six light window with decorative tracery and above that, a rose window – a common feature of church buildings of the time, a similar example of which can also be seen in the refractory at Bellapais Abbey. The vast amount of carved stonework over the porches is very impressive. The side doors are topped by tall blind double light windows.

The interior of the cathedral has a pleasing simplicity about it, over fifty metres in length and near to twenty metres wide with six columns on each side supporting the vaulting. The walls have been cleaned and the stonework remains bare. It is without transepts and has a nave with two side aisles and a triple apse – the very nave that the Lusignans were crowned as Kings of Cyprus.

Two chapels were added on the south and north wings. A unique inscription on a buttress beside the south door can be found which records the progress of construction in 1311.

The entire floor is carpeted with the exception of one small section in the northern apse where can be found the tombstone covering the last resting place of the Diocese of Famagusta Itier of Nabinaux, who is said to have died of a chill caught after bathing in the sea in 1365, depicted holding his pastoral staff. It is believed other mortal remains buried beneath the concealed flagstones were thrown out after the Ottoman conquest, however what still remains underneath the carpets today is not known.

The most noticeable features outside are the twin bell towers. They once had fine windows, but the tracery has now all but disappeared. Only the lower sections of the towers survived, and the north tower has been topped with a slender minaret. Look closely and you can still see damage caused by the Ottoman siege. As is customary in the Eastern Mediterranean, the roof build is flat.

The parvis is shaded by an ancient Ficus Sycomorus tree, reputedly the oldest living tree on the island of Cyprus. The plaza in front of the cathedral-mosque has been pedestrianised, and the outdoor cafés provide vantage points from which to admire the façade at leisure and have a spot of lunch.

The famous Cathedral of Saint Nicholas appears in several works of literature, including Kuraj by the Italian writer Silvia Di Natale and Sunrise by the British author Victoria Hislop. This attraction is a must-see on your NCY visit. 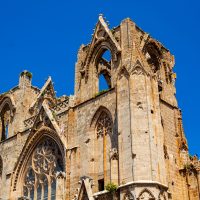 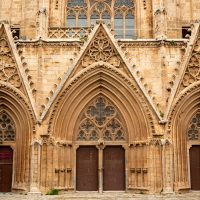 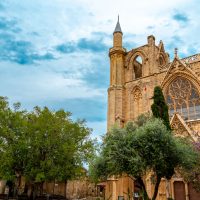 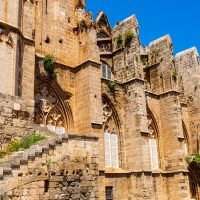 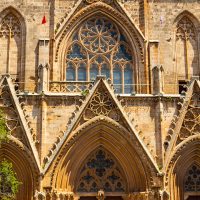 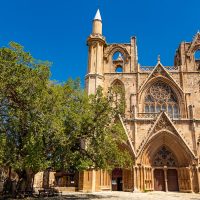 In Famagusta town centre lies this ancient tree of colossal size. Outside the entrance of the Lala Mustafa Pasha Mosque,...
Discover

Palazzo del Proveditore, commonly known as the Venetian Palace, was a royal palace in Famagusta, originally built by the Lusignan Kings of Cyprus. Located...
Discover
Discover
The Island
Events
Media
Travel plan
NCY For
Essentials
This website uses cookies to provide you with the most relevant information. Please accept cookies for optimal performance.AcceptRead more