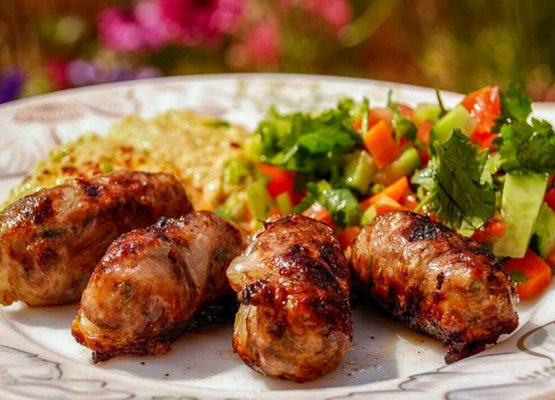 No visit to NCY can be complete for non-vegetarians without trying this traditional feast.

Seftali (shef-ta-lee)is a type of crépinette, a sausage without skin, that uses caul fat, or omentum, the membrane that surrounds the stomach of a lamb, to wrap the ingredients together.

The filling is made from lamb shoulder or leg, mixed with finely chopped onion and parsley, seasoned with salt and pepper.

Rolled into small balls, the filling is wrapped in the caul fat and then placed on skewers and grilled or charcoaled until golden brown.

By the time it is cooked and served, the outer layer of fat is melted away and reduced to a thin golden-brown layer.

Seftali is commonly served in Cypriot pitta bread with salad, and sometimes topped with Cacik, a Turkish appetiser or sauce made from yogurt, cucumber, olive oil and mint.

For those curious about the name, there are two theories as to how this local favourite acquired its name:

The Turkish word şeftali, which means peach, a reference to its texture or pinky complexion when cooked.

Another popular urban explanation is that a Turkish Cypriot street vendor called Ali invented the recipe, and foreigners who tasted this delight quickly dubbed him “Şef Ali” (Chef Ali) and his sausage became known as Şef Ali Kebab, which Turkish Cypriots later shortened to “Şeftali Kebab”.

One of the most popular kebab dishes, Seftali should definitely be on your must-taste list of traditional Cypriot dishes when visiting! 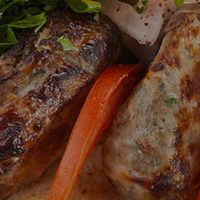 A Cypriot pomace brandy produced from the distillation of a mixture of grape pomace and local dry wines, Zivania is colourless and alcoholic with a...
TASTE

A mixture of brandy and cordial made from the most organic lemons of the Güzelyurt region, Brandy Sour is a local...
Discover

The Besparmak Mountains are swarming with carob trees and the sweet thick syrup which Turkish Cypriots extract from the pods...
Discover

Hellimli is a traditional Cypriot savoury pastry made with Hellim cheese. Consisting of flour, water, salt, butter and olive oil, it is enriched by the addition of...
Discover

Hellim is a traditional food that has been produced on the island of Cyprus for centuries and well known worldwide...
Discover

Colocasia esculenta is a perennial, tropical plant primarily grown as a root vegetable for its edible, starchy corm.  The vegetables cultivated in NCY are much...
Discover

The leaves of Corchorus Olitorius, commonly known as Jew’s mallow, Nalta jute, or Tossa jute.  Molohiya is indigenous to Cyprus...
TASTE
Discover
The Island
Events
Media
Travel plan
NCY For
Essentials
This website uses cookies to provide you with the most relevant information. Please accept cookies for optimal performance.AcceptRead more