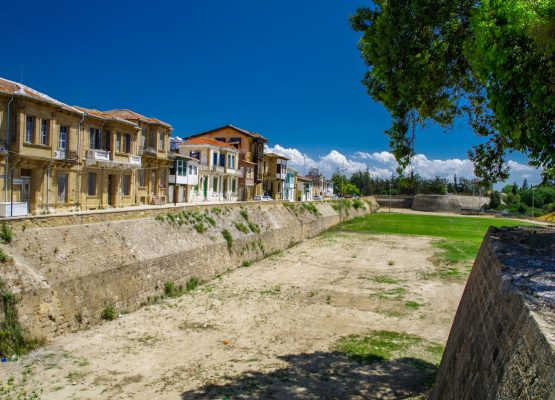 During the Renaissance era the Venetians constructed great walls around cities in Cyprus, threatened by the impending Ottoman Empire.

Among the finest examples of these are the walled cities of Famagusta and that of Nicosia for which fortifications commenced in 1567. The Venetians commissioned the Italian military engineer Giulio Savorgnano and Francesco Barbaro to the design the plans.

Following the Great Siege of Malta in 1565, fears of an Ottoman expansion increased and indeed many Christian states in the Mediterranean began to strengthen their fortifications.

The new walls replaced the old-style medieval fortifications built by the Lusignans, which engineers deemed inadequate to defend the city and were demolished. The Venetians also destroyed palaces including the King’s Palace as well as churches and monasteries of both Orthodox and Latin Christians, to acquire building materials and also for a clearer perspective for the defence of the city.

The Venetian fortification complex had a total circumference near to five kilometres and held eleven pentagon-shaped bastions and three gates, all named after the noblemen of the time who sponsored the construction, including Rochas, Loredano and Barbaro.

Nicosia, like Palmanova in Italy and Valletta in Malta, became a practical example of an ideal city of the Renaissance, with its fortifications and urban life within the city walls.

The positioning of gates to the side of the adjoining bastions allowed the city to be more easily protected in times of siege, and leaving the upper half of the wall unlined with masonry increased its ability to absorb the impact from any cannon fire.

Nonetheless, these fortifications were in vein and the city fell to the forces of the Ottoman admiral Lala Mustafa Pasha in 1570, before the Venetians had even managed to complete the whole construction. The Ottomans captured the bastions almost intact and they remained almost unchanged until the British era.

A major tourist attraction, the walls and gates have also undergone restoration and are recognised among the best-preserved Renaissance fortifications in the Eastern Mediterranean.

Of the eleven bastions, five remain in the divided Turkish capital of Nicosia and one under the control of the United Nations.

In the centre of Ataturk square, locally known as Sarayonu, is the Venetian Column. The column was moved from its...
Discover

Also known as Othello’s Tower, this famous construction was originally built as a moated citadel in order to protect Famagusta’s...
Discover
Discover
The Island
Events
Media
Travel plan
NCY For
Essentials
This website uses cookies to provide you with the most relevant information. Please accept cookies for optimal performance.AcceptRead more