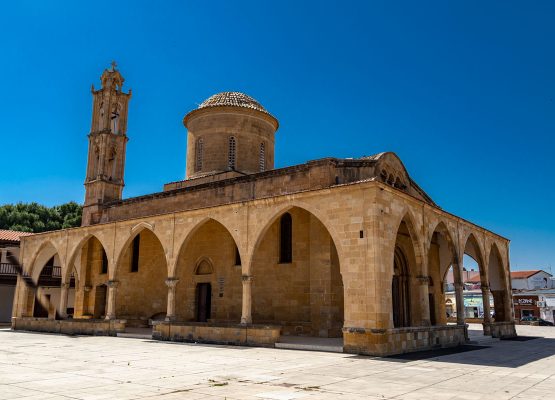 Dedicated to the island’s beloved tax-repelling patron saint, the church was formerly the site of a pagan temple.

St. Mamas Monastery in Guzelyurt is the third most important place of worship for the Greek Orthodox in North Cyprus, after the St. Barnabas Tomb at Famagusta and the Apostolos Andreas Monastery in Karpaz.

According to local legend, Mamas was a hermit living in extremely poor circumstances in a cave outside of town. When the authorities tried to tax him, he pleaded poverty and evaded them for some time. Soldiers were sent out to recoup the levy and arrested him at his dwelling. However on the way back Mammas escaped, by jumping on to the back of a ferocious lion attacking a lamb, and he rode it all the way into town whilst carrying the injured lamb in his arms. On seeing this sight, the Byzantine authorities were so impressed that they decided to exempt him from paying taxes for the rest of his life and of any punishment. Since then, St. Mamas has been the Patron Saint of tax avoiders! Locally so famous there are over ten churches on the island dedicated to this Christian Saint.

There is another lore that says Mamas was killed in Anatolia and was placed by his family in a stone coffin aided by Jesus Christ. The story continues with the coffin swept away to sea and washed up on the shores of Guzelyurt Bay. Discovered by a local farmer, he harnessed the immensely hefty coffin to two oxen and hauled it as far as the beasts could manage, and when they could go no further, a church was built around it!

Most of this compound dates from the 18th century but its Iconostasis, the lavish wall of icons and religious paintings separating the nave from the sanctuary, is a gorgeous sample of artful wood carving of the 16th century.

The church in the monastery was originally a Byzantine building, built on the site of an Aphrodite temple. It has been reconstructed at various times over the centuries, and most of the buildings today date to the 18th century, when the large central dome was also added. The side portals and columns of the nave however survive from an earlier Gothic church built by the Lusignans.

A strange mixture of Gothic and Byzantine styles, it is more spacious than many other Orthodox churches on the island. It has a central nave, apse, and two side aisles, with the grand dome that rises above the nave at the altar end, pierced by six tall narrow windows.

The columns are decorated with foliar carvings, vine leaves and visages carved with clear delineation.

Into the Iconostasis are incorporated marble panels that are carved with Venetian coats of arms, and there are two marble pillars on either side of the Holy Door that are evidence of early recycling, probably from an earlier church though not necessarily on this site. The pulpit was built in 1711, and the oldest icon is dated to around 1745.

There is no evidence that this church was ever in use by members of the Catholic faith and therefore presumably it has always been a place of Orthodox worship.

The most beautiful exhibit in the church is the magnificent crystal chandelier that hangs in the centre of the apse and surprises every visitor upon entry through the side entrance – its plain outer façade gives no hint of its splendid interior. Hundreds of droplets glow with all the iridescence of the spectrum when the lamps are lit, and it is flanked by smaller, though equally elegant examples of the glass-blowers craft.

St. Mamas is shown as a relief on the outside of the church as well as on several icons in the interior of the church.

Outside the church, the monastery buildings are to the north and east, and records show them as being built in 1779. Architecturally, the arches on the front of the northern buildings that reflect a traditional style are quite different to those on the eastern side, which have a resemblance to 18th century Ottoman inns, with stone columns on the ground floor and timber balconies on the second.

The marble sarcophagus of the Saint can be found forming part of the north wall of the church, surrounded by richly carved decorations many in the shape of ear drums, depicting scenes of excruciating martyrdom.

It is said that during the Ottoman rule, believing there was treasure hidden in the coffin, they pierced holes into its lid, from which in turn an ointment liquid oozed out. This liquid which appeared at irregular intervals was is purported to have curative properties.

Around the tomb you will see votive offerings in the shape of ears since St. Mamas is not only the Patron Saint of tax avoiders, but also of those suffering ear aches and infections!

Local legend has it that St. Mamas, a devout Byzantine hermit who refused to pay tax since he had no income other than alms and lived in a cave, was ordered to be arrested by the local Governor. As he was escorted into custody the group encountered a lion about to devour a lamb along the roadside. The saint commanded the lion to stop, picked up the lamb, mounted the lions back and rode on the back of the lion into town. Upon seeing this, the Governor exempted the saint from taxes thereafter; hence he became the patron saint of tax-evaders and animals.

Whilst the Icon collection is not as extensive as the collection at the St. Barnabas Monastery, St. Mamas remains without doubt the most beautiful and best kept of all the Orthodox churches that are preserved as Icon Museums on the island and is the highlight of any visit to Guzelyurt.

Nevertheless, the magnificent collection of religious Icons is certainly worth your time to observe, the skilled art and craftwork dating back to many centuries ago.

The Guzelyurt Museum of Archaeology and Nature is also a short wall away and houses unique pièce de résistance. 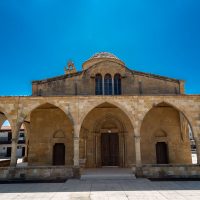 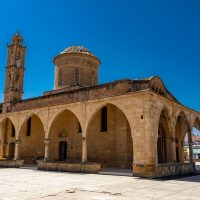 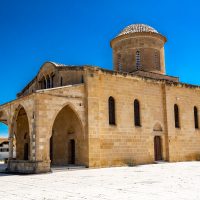 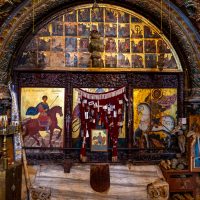 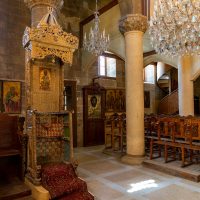 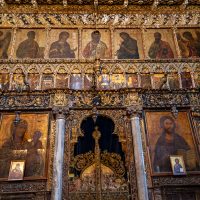 This small township grouped on the steep slopes of a conical hill watched over the city kingdom of Soli near...
Discover

Within a hill near the tiny village of Cinarli sits the largest cave on the island. Taking its name from...
Discover