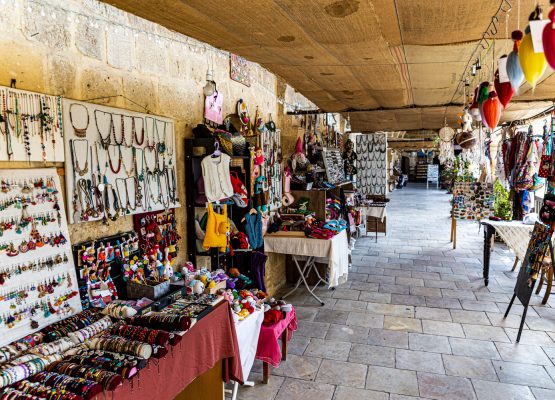 Many proud handicrafts of North Cyprus exist and are crafted to the very day, carrying forward years of cultural heritage and expertise.

The characteristic embroidery art of the island is the handmade Lefkara Lace, dating to at least the fifteenth century.

It was the Venetians who inspired the creation of Lefkara Lace, during their occupation of Cyprus 1489-1570. Local women copied the fine embroidery of the Venetian ruling class clothing, customising their own designs to increasingly high standards as these laces became to be considered a centre piece of a dowry.

Traditionally Cypriot girls had to have an extended collection of Lefkara Lace ready for exhibition on her wedding day, and in this way, these have been past from mother to daughter over centuries.

Cyprus Lefkara Lace is made of linen with thread and varies in its’ shapes and cutting techniques used to decorate the final hand craft. It is quite distinctive and notable characteristics are the hemstitch, satin stitch fillings, needlepoint edgings to form embroidered linens such as tablecloths and napkins, and are only made in white, brown and ecru colours bearing intricate patterns. The other distinctive feature of fine lace in North Cyprus is that there is no difference between the front and back of any piece. Only lace made in this traditional way is considered to be authentic.

The design for Lefkara Lace is first drawn onto paper, and then a transparent second sheet placed over this to protect the lace. Needles are placed along the design outline, and a thread tied to the front-most needle. The thread is then run around the outside of all the needles and tied to the last needle. Once three layers of such threads have been built up, they are stitched together like a buttonhole. Gradually, the lace starts to form, rising out from the paper base. The result is an incredibly delicate, intricate and true labour of love.

The skilled art is recognised on the UNESCO Intangible World Heritage List, defined as ‘practices, representations, expressions, knowledge and skills’ from around the world that are protected for their invaluable cultural heritage.

The linens became an important trade under Venetian rule, so famous that even Leonardo da Vinci personally visited Cyprus to find embroidery for decorating the altar of Duomo Cathedral in Milan.

When visiting small NCY villages you may come across ladies sitting on their front porch busily hand-embroidering, working the lace as they have done for centuries.

Lace work of Lefkara is a hot buy for visitors to North Cyprus, perhaps even as gift to pass down through generations in truly Cypriot fashion.

Available in souvenir or handicraft shops, the most renowned however are at the Buyuk Han in Nicosia.

Other proud handicrafts of North Cyprus visitors will come across or search for include:

Hesap Embroidery, a colourful embroidery from the Lapithos region of NCY created using a cross-stitch technique applied to a linen cloth pulled taut on a circular wooden frame. The outline is unique in that it is applied in dark silk rather than the more common method of a pencil drawn outline. The name “hesap” which means calculate is given to these works because while decorating them with different motifs, each strand is counted one by one.

Yemeni, finely decorated head scarves that used to be widely worn by Turkish Cypriot women as a symbol of richness.

Plant Knitting, which uses stems, leaves and twigs, as they are or by cutting them into thin strips to produce items like baskets, trays for bread, brooms and even jewellery caskets.

Silk Cocoon Decoration, originating from the Karpaz Peninsula, are firm to the touch enabling each cocoon to be opened and folded out flat, from after which intricate shapes are then cut and sewn onto the fabric.

Ceramic works and art have been ongoing for centuries in North Cyprus, as the island’s clay soils have enabled the development of creative pottery over time.

The island’s main marketplace has been operating for almost a century. The yard of Selimiye (St. Sophia) and Bedestan (St...
Discover
Discover
The Island
Events
Media
Travel plan
NCY For
Essentials
This website uses cookies to provide you with the most relevant information. Please accept cookies for optimal performance.AcceptRead more