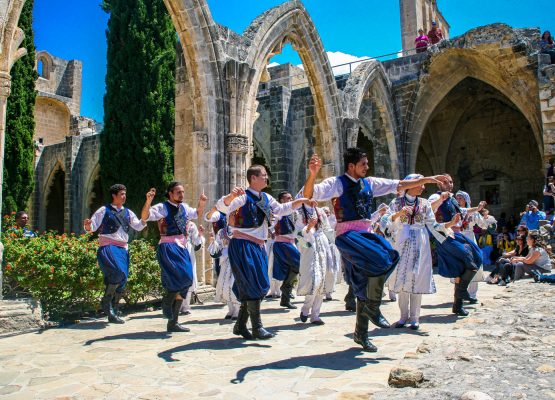 Many countries around the world have a traditional dance that has been passed down through the generations and North Cyprus is certainly no different.

Folklore occupies a very important place with the locals – Turkish Cypriots have benefited from an assortment of civilisations that have all influenced the cultural heritage of NCY and folklore represents its unity and identity.

One popular folk dance is the Karsilama where men and women perform together. It is a long series of dances presented by pairs dancing face to face, among whom there exists a very good friendship, creating a smiling mimic on the dancers’ faces. Dance in perfect timing, the men and women typically present different but complimentary moves.

The Sirto is recognised as the oldest folk dance in North Cyprus, where dancers hold each other’s wrists forming a circle. There are twelve basic steps involved, where one dancer leads the rest of the participants, varying the tempo. In some parts of Sirto, pairs of dancers hold a handkerchief from its two sides, as can also sometimes be seen in Karsilama.

Individually, from time to time dancers may show their special talents like spinning, jumping, kneeling or hitting their feet or legs or the ground with their hands, simultaneously or in tune with the rhythm of the playing music.

The colourful costumes worn by folk dancers in North Cyprus reflect the origins of the dances. The women wear colourful headdresses and jewellery, and dress in eye-catching dresses usually are knee length. The men wear white shirts with black knee-length trousers, and a wide red cloth belt. Combined with their blue waistcoats and red fez hats, their dashing North Cyprus folk dancing costume is completed by a pocket watch or handkerchief.

A live folk dance nowadays is likely to be performed to a taped version of the music. The folk dances of usually accompanied by musicians, playing traditional instruments such as the zurna, a traditional reed instrument with a distinctive and evocative Middle Eastern sound. Two types of drums can also be played, the smaller darbukaplayed with both hands, and the larger davulwhich is beaten with a stick. A violin is also usually played, and other instruments can be added, such as an accordion, or mandolin.

Other than the folk music which accompany dancing, entertainment and shows, the other genre of “Türkü’s” are equally important – the most being famous “Dillirga”, “Kebapçıların Şişi” (“the skewers of the kebab makers”) and “Portakal Atışalım” (“let’s throw each other oranges”).

Dancing is a way of life in NCY and can be seen in bridal showers, weddings, festivals and even during harvest time – a way to show emotions of joy and gratitude.

Turkish Cypriot folk dances are not only significant because they are enjoyed by locals but also because they receive much acclaim in other parts of the world – indeed many folk-dance groups routinely represent North Cyprus at internationally held festivals.

The annual “Folk Dance International Festival” is also held in Iskele, usually around the end of June, attracting groups from around the world. Lasting a week, the festival brings together the beauty of diverse cultures. It’s especially quite a sight to see the younger generation of Cypriot folk dancers getting to grips with the sickle dance, when the lengthy sickles they are holding are almost that of their heights!

The various dances are a fantastic opportunity to immerse yourself in an ancient tradition. Stay up to date with the several Events & Festivals held throughout the year from our interactive page and be sure that your next visit to NCY will coincide with a live cultural experience.

Inhabited mostly by British and German expatriates lies a village on the mountain slope west of Kyrenia. Also known as...
Discover
Discover
The Island
Events
Media
Travel plan
NCY For
Essentials
This website uses cookies to provide you with the most relevant information. Please accept cookies for optimal performance.AcceptRead more